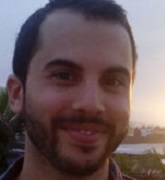 After having earned a BA in History from the University of La Laguna (ULL), Tenerife, in 2012, Álvarez obtained an interuniversity MA in Contemporary History from the University of the Basque Country (UPV/EHU), where he has been working on his PhD thesis in Contemporary History since 2016. In the 2015 call, he was awarded a pre-doctoral trainee research fellowship (PIF) by the UPV/EHU.

The objective of his research is to analyse the evolution of the meaning of the female body during the first Francoism, employing an approach based on the legal documents of the Juvenile Court of Bilbao, together with material from state archives. This is supplemented by an analysis of other primary sources (legislation, medical manuals, Catholic literature, Falangist publications, etc.). From an intersectional perspective, Álvarez’s intention is to analyse how the female body was constructed between the 1940s and 1960s, bearing in mind the crossing of different variables (gender, class, age, religion and nation) which were shaped in different ways over time.